More of the Same of My Southern California Dream Home 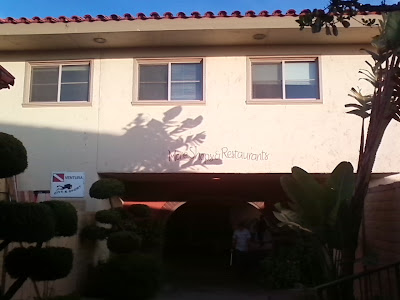 More pictures of the same spot, looking up at my dream home at Ventura Harbor Village.

Two things came to mind today as I thought about this location: First, I'm not even sure if there's a shower in the square footage behind these windows. A bathroom there must surely be, but are these units also for living? If so, then there should be a small kitchen too. I'll probably never find out, but that's how I'd like it if I became a resident. 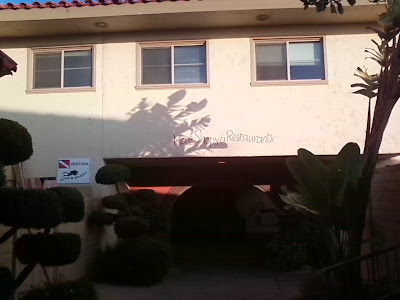 All I'd need in that apartment is a bed, a couch, a coffee table, a TV, a DVD player, and basic cable (for Jeopardy! and The Big Bang Theory on CBS), and I'd devote the rest of my space to bookshelves. Inspiration for my own writing would come from what I have on those shelves, what I get every week from a hopefully nearby library, and just by walking the grounds of Ventura Harbor Village. Tourists wander, the line grows long at Coastal Cone, and I can always watch boats sail the harbor, as well as gawk at the mammoth ones that are docked at various slips. 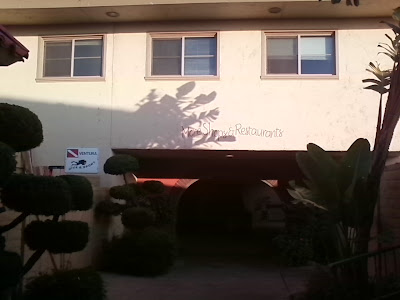 The price for a bowl of New England clam chowder at Andria's Seafood Restaurant is $6.09. If I hit the lottery or had a job there that pays well enough to maintain such a harborside lifestyle, then yes, I could have it every day for lunch if I wanted, but I wouldn't want to get tired of it. So once in a while for lunch, on an idle Tuesday or Wednesday that just feels right for it. 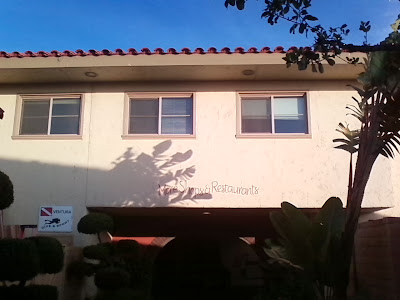 My preferred space is the third window on the right. In yesterday's entry, I linked to the hardcover edition of The Ha Ha by Dave King. Where the foot of the bed is in that photo is where I'd place my bed under that window on the right. It feels right. For me, it would also feel like every day is the weekend. Every day should feel like the weekend anyway, but being that my dad is a teacher, and I'm a substitute campus supervisor, Monday through Friday feels like Monday through Friday. Not so much in dreading Mondays because any day you get paid is a good day, but just that schedule of the week with weekends off that makes a Friday feel like the universe has aligned itself, and Saturdays and Sundays entirely up to you. Or maybe it's just where we live right now. Once in Henderson, I'm sure I can make every day feel like the weekend. There's more to see and do there than there is here. 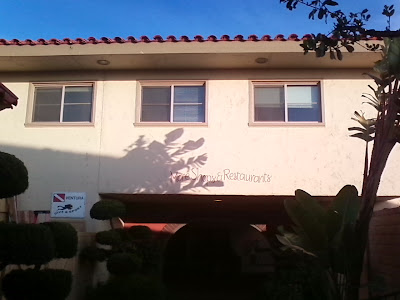 Ventura Harbor Village has a Greek restaurant called The Greek at the Harbor. I'd be set. They've got feta cheese, and moussaka, and baklava. They've also got window seating where you can look out at some of the boats. Feta cheese and that view would suit me fine. 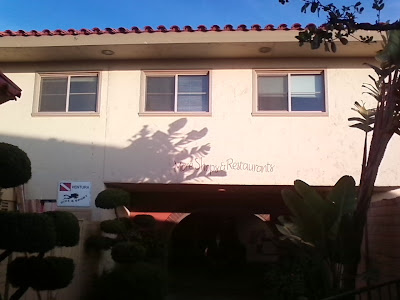 Lately in my head, I've been hanging out at Fashion Outlets of Las Vegas in Primm, right near the Nevada/California border, and the Buena Park Mall in Buena Park, where Po Folks used to be, and where Knott's Berry Farm is. For a long time, I've been fascinated by that mall's utter straightforwardness. Nothing to try to entice shoppers to go there. It's just there, and people do go there, and they shop there, which I know is the purpose of every mall, but this is also a rare mall where you can feel history hanging heavily over the area. It's not just perhaps the ghosts of Buena Park's founding fathers, but also past citizens themselves. It's the one city I know of in Southern California that keeps its history alive, and even if it didn't, you could still feel it like you do when you're walking around wherever you are in Buena Park.

I've also thought about Ventura Harbor Village beyond these entries. Because of it and San Juan Capistrano, I've always been amazed that peace can be found in Southern California. It's not a frantic rush to wherever you need to go, wherever you have to go, and whatever you have to do. Life can exist without that silent pressure. I don't have it anymore since I know I'll be going home to Nevada soon enough, but I hope there are people in Southern California who do call that part of Ventura, and San Juan Capistrano, home, for the reasons that I believe it can be home. They must appreciate it every day. It seems like it would be a good life, but maybe even more if the state wasn't so overtaxed. Plus I don't drive freeways, and once I'm out of California, I'm never coming back. It'll be home in my imagination until I arrive home and then it'll be in the back of my mind. I won't have to fantasize anymore. But I will always appreciate what Ventura Harbor Village has done for me and my imagination, because I felt relaxed and I was shown that life exists outside that franticness, and it set me on a course to find better for myself, which I've found in Las Vegas and Henderson. You can't ever forget a locale that does something like that.
Posted by Rory L. Aronsky at 10:58 PM