Standing Still While Traveling on the Rails

Living in Las Vegas, you can't help thinking about traveling. Even if you're not doing it yourself, license plates in the parking lot of your local supermarket, of Target, of Walmart, and at intersections, pull you along.

Go to the Strip during the weekend and you will hear a British accent or two. But here you will remain, at home, a local. The tourists come and go while you go to work. This is a transient city, not just in tourist turnover, but residents, too. Some don't stay long. Las Vegas is merely a way station for them to figure out where they want to go next, and perhaps settle for good. Some come here with high hopes, but within months or a year, they can't stand it and leave for more agreeable destinations.

On the other hand, I am home. I'm not leaving. In the past week, I have seen nearly all of Flamingo Road while walking, and now I know it well. A permanent first step. Next I want to know Pecos and all the other streets, and more of Boulder Highway, which I have walked to the back end of Sam's Town. But I am also leaving soon, though not going as far.

In September, my family and I are moving to Pacific Islands, a forest-like apartment complex in Henderson that has such wispy trees, you wouldn't be far off if you spotted fairies playing among the branches. There, Las Vegas is always reachable whenever we might want it, and Boulder City is much closer.

I have already found my piece of home there, a chest-high wall I stand at in one section of the parking lot to look out at the railroad tracks across the way, separated by a deep wash below, and a fence above that: 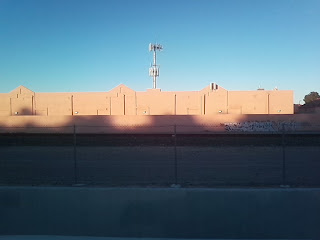 The above photo is the first view I see when I walk up to that wall across from one of the apartment complex buildings, across the parking lot. That is graffiti you see, very well-done graffiti, actually. More thought is put into graffiti in the desert because we have more time with such an epic landscape. Sometimes it's just a matter of marking who you are and moving on, but some of it is like that, with depth and dimension. It doesn't seem to bother anyone. In fact, one of the times I was at this wall before I took these photos, I saw a woman walking her dog across from the tracks, near the graffiti. The City of Henderson does care about how everything in its limits is doing (though its recent City Council vote to allow The District at Green Valley Ranch to have vehicle traffic in place of the pedestrian mall it used to be is highly questionable, being that it was the most peaceful place in Henderson), but graffiti near the train tracks isn't such a big deal because no one really hangs out there. Except me, at that wall, and I like it. It's anonymous history.

Whenever I'm not working, whenever it's not too cold, whenever Hell isn't being simulated during the summer, I'll be there. I can't bring a folding chair with me because the view would disappear when I sit down. But I can stand there, with a book, reading some, and then looking out at the view, back and forth. That view inspires me, inspires my writing. I want to do more with my words when I'm looking at that. But that's nothing compared to when I look to the left, as far down as my eyes can take me: 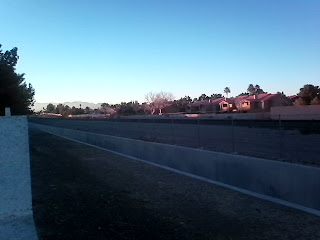 When I look at the view right in front of me, I think a little about traveling, about the presidential libraries I want to visit. But when I look at that view, it's like this scene in A Clockwork Orange, but 100% less sinister and far more inspirational. The libraries become more vivid, as well as their surrounding areas that I might visit, too. I think about traveling throughout New Mexico, how badly I want to see the desert as they have it. I think about going back to Florida, visiting whatever of my old haunts are still left, to see how they've changed. I think about books I've yet to read related to all this, presidential history, books about New Mexico and Florida (I want to learn more about my home state than I felt I did when I was in school), and especially Stranger on a Train: Daydreaming and Smoking Around America with Interruptions by Jenny Diski. Every time I see this view, I always want to reread that book, even now when I'm just looking at this photo I took.

I also think about another person I will never know. On the morning we moved from Santa Clarita to Las Vegas, we stopped in Barstow, at Barstow Station, which deserves its own post for excellent train station theming that's only too appropriate since one side of it faces the railroad tracks, a bigger section than what I see at Pacific Islands. Meridith and I got out of the car first when we parked right in front of the fence through which we could see those tracks, to walk Tigger and Kitty, and while I was walking Tigger, a train swept by. There were boxcars on it, and empty spaces where a boxcar would go. Standing on one of those spaces where a boxcar would be coupled onto the train was a teenaged boy, who looked like he was in his mid-teens. I raised my hand to wave a bit, and he turned to look at me until he was out of sight. Maybe he was running from some kind of trouble. But for a brief second, I wanted to jump aboard with him and see where we'd go. I've never forgotten that moment, nor about him. I wonder where he is, if life has gotten easier for him, and if that was the case, I hope it has. There's travel for pleasure and travel to get away. I hope he's somewhere now where he can enjoy the former whenever he wants.

And then, after a few minutes, I snap back to where I am, standing at that wall, looking at those train tracks. For now, it's always time to go. I get in the car and Dad pulls out of the lot to wherever we're going next. But when I'm a resident there, when I return to reality, all I have to do is turn around and walk back to our ground-floor apartment, wherever it may be on the property. To have that view all the time and to know that Boulder City is closer than it is here in Las Vegas is all I need. I am home in Nevada, no matter where I am, but now I'll have my place, where I belong. And once in a while, I can watch one of the three daily trains rumble by from my spot.

My place. My home.