If I was a different Rory L. Aronsky, content to live in Southern California for the rest of my life, and making enough money to move wherever I want without concern, or hitting the lottery to the same effect, I know exactly where I would want to live.

At Ventura Harbor Village, in Ventura, above the arcade containing my beloved Galaga machine, above Coastal Cone where a butter pecan malt tastes oh so sweet and oh so wonderful, there is square footage up there, separated by walls, that could conceivably be used as offices. A psychiatrist could hang a sign there if they wanted, or a real estate agent, or some business that requires an office in place.

Outside the back exit of the arcade, next to a pair of restrooms, I stand north, looking up at windows that make up my favorite spot, above a carved-in sign that says "More Shops and Restaurants": 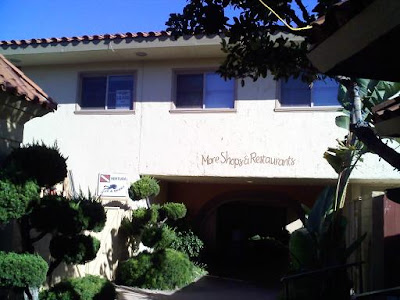 This is my Southern California dream home. I'm not sure what the square footage is behind any of those windows, but I would set up an apartment there. I would want to live at the harbor, looking out at all the boats, sitting on a bench having a butter pecan malt, and playing Galaga whenever the arcade is open. All I would need to know is how close I am to the nearest library.

In fact, there's a novel called The Ha Ha by Dave King that I bought last month, 30% for the novel itself, and 70% for the cover, because it reminded me of standing on that very spot where that picture was taken, imagining the window open just a bit, the blinds up just a bit, the foot of my bed right under that window, and me laying on it, reading. I could make a peaceful life for myself there because I feel so at ease every time I go there. Sure, there may be problems in Ventura itself, issues that have festered, but unlike the Santa Clarita Valley, where I feel like I'm crushed under so much bullshit disguised as passivity (though I've sadly gotten used to it over the years, and will be well over it by the time we move), being at Ventura Harbor Village makes you feel like no matter if there are problems, there is a time for them and that's not this time. Not so much ignoring for the sake of relief, but a more easygoing nature toward solving issues.

This is where I would be, happily, if I was a different me.
Posted by Rory L. Aronsky at 11:40 PM