On Friday, March 30, at Pavilions, I saw this sandwich menu board: 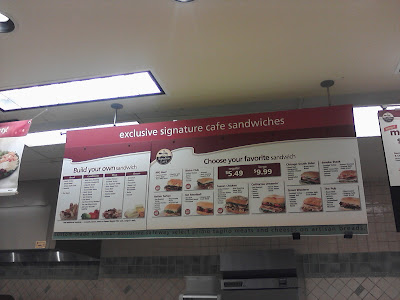 On the left side are options to build your own sandwich, with the bread you want, the meats, the cheeses, and the condiments. Meridith did the math on her calculator and came up with over 3,000 different combinations. I was curious, but for me, the fun is more in putting many combinations together, seeing what sounds good.

On the left side are ready-made sandwich types. Just order whichever one you want, and they'll make it for you. You don't have to come up with your own sandwich. Not a great deal of imagination in these sandwiches, but since it's just a supermarket, where you get the groceries that you need during the week, that's not to be expected. And there's photos of each sandwich, photos sanctioned by whichever division of Safeway Inc. handles such matters.

Yesterday at Pavilions, I saw a new sandwich menu board: 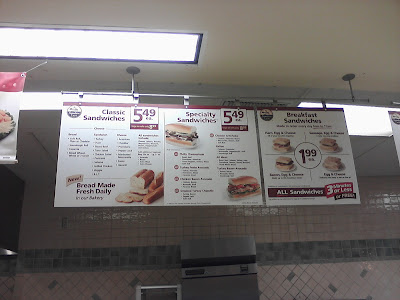 I wondered what had changed so much to trigger the need for a new sandwich menu board. Were customers so unsatisfied with how their sandwiches looked compared to what the photos showed that an exasperated Pavilions asked for a new sandwich menu board sans the photos? I see also that the "California Dreamin'" sandwich has changed to simply "Turkey Bacon Avocado." I think I know why. "California Dreamin'" would be the name for the sandwich in Detroit since Detroit is far enough away from California, particularly Southern California. But living in California every day, there's no dreaming involved. We live however it keeps us sane. In California, why would we be dreaming of California? Ultimately, that name makes no sense here.

On the new board, there's only a photo of bread in the now-"Classic Sandwiches" menu instead of "Build Your Own Sandwich." I guess shoppers trust that there will be meat and cheese in a sandwich, and no photographic proof is needed. Plus, it looks like a sign of cost-cutting, or of the sandwich counter not doing so well here (unless it's a company-wide edict) that there's no condiment offerings on this menu. The one from the end of March has a fair list of options, but all you'll find of condiments in this new menu is under "All Sandwiches Include:". Mayonnaise and mustard. That's it. Must not be a demanding crowd here. It always fascinates me that there's someone in the company, perhaps overseeing this region, who looks over reports of what's selling and what's not and determines what should be stocked by that. All those lists, all those figures. That's a person I'd be interested in talking to, not to suggest anything myself, but to wonder how they do such a job, what they do after they determine what's needed, and who has to sign off on it. It's like how the Walmart on Kelly Johnson Parkway sells books that are different from the ones at the Walmart Supercenter on Carl Boyer Drive. Someone studies all that.

It's a streamlined menu, I guess. The more time people spend staring at a menu, the less time they spend ordering. Lost minutes are lost sales. Put the same price on each menu instead of in the middle of the "Choose Your Favorite Sandwich" menu on the one from March 30, show that all the breakfast sandwiches are $1.99, and that's that. Less for a customer to look at, everything close together, and they'll spend less time staring at the menu trying to decide.

At the bottom of the new one is "3 Minutes or Less or Free." For the rushed office worker, no doubt. It seems disheartening though. No one wants to wait for anything anymore. No one wants to take time to look around a bit. I must be the only one who, despite knowing every inch of that supermarket, always finds something interesting (to me) to look at. In this case, the menu boards, and wondering who created them, what meetings there might have been to determine what they should look like, because you just know there had to be meetings for such a thing.

On the March 30 main sandwich menu is a Chicago South Sider, which has disappeared from the new menu. Doesn't sell here. Only the basics in sandwiches for all. I'm not sure if this will improve sandwich sales, though. Every time I've been there, the sandwich counter has always been empty. It's cheaper to grab the already-made, already-wrapped half-hoagie sandwiches in the refrigerated case that sell for $2.49 each if you buy two or more. $3.99 if you only buy one. For $5.49, I'd prefer to find a more adventurous sandwich than what's offered on the new menu. Once in Henderson, I want to see if there's any changes in the sandwich menus. Since a great number of residents come from somewhere else, I should think Vons would want to be a little more daring there. Or maybe not, since there's so many options for eats in Henderson. Better to be safe than unprofitable. I still want to see.
Posted by Rory L. Aronsky at 6:41 PM